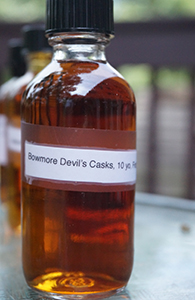 This was released late last year to a fair bit of acclaim. I believe it is fetching ludicrous prices on the secondary market in Europe. In a conscious attempt to stop chasing every new “noisy” release I passed on a bottle—ditto with this year’s Ardbeg Supernova. It was a bit of a tough decision though as Bowmore is one of my favourites and good sherried Bowmore, in particular, is one of life’s great, and quite unique, pleasures. (See my reviews of some I’ve liked a lot: here, here and here). Courtesy a sample swap, however, I get to taste it anyway—hopefully, this will not lead to too much regret.

There’s a second edition out, by the way. Despite the frenzy that erupted around the first release, Bowmore has kept the price of the second edition the same—to their great credit. There are stories though of unscrupulous retailers in Europe marking it up dramatically or in some cases even selling bottles at auction. I wonder what the story will be when it gets to the US. END_OF_DOCUMENT_TOKEN_TO_BE_REPLACED