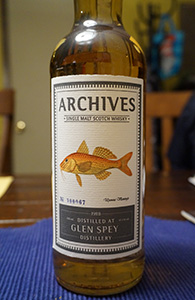 I’ve not had too many Glen Speys. But I’m not alone in this—very few people have had very many Glen Speys. This is because Glen Spey is mainly a producer of bulk malt for Diageo’s blends and is rarely seen in single malt form. Diageo did release an excellent 21 yo as part of the annual special release a few years ago (and I really liked it), but there are no other official releases out there. Nor does it see much exposure from the independents. This part is more mysterious as, usually, indies tend to get their hands on a lot of casks from these kinds of distilleries: compare a total of 120 entries on Whiskybase for Glen Spey against 202 from Braeval or 320 from Benrinnes (only five of those 120 Glen Speys on Whiskybase are OBs, by the way, and of those three were the aforementioned one-off 21 yo and the likewise one-off Manager’s Dram and Manager’s Choice—the other two are an older 8 yo and one in the Flora & Fauna series that may or may not still be a going concern).

As such it’s always hard to resist a Glen Spey when it is available. And as this one was released by Whiskybase in their Archives series, it seemed like a good bet: everything I’ve had in the series has been at least solid, some have been very, very good, and none have been duds. Let’s get to it.