As I mentioned in my write-up on Sunday of Spice Bazaar, currently the major/only Indian grocery in Woodbury, that we were up that way on account of having a date to pick up more takeout from Indian Masala. Yes, Indian Masala is in Maplewood but Maplewood is a very weirdly shaped town and for all intents and purposes you could say that Indian Masala is in Woodbury. We first got food from Indian Masala in October. I gave it a glowing review and later in the year placed them, along with Godavari in Eden Prairie, in the top tier of my rankings of Twin Cities Metro Indian restaurants. We’ve been planning to go back for more for a while. And given how much we enjoyed their South Indian offerings I’ve been keen to try their North Indian dishes even though that’s the genre that has soured me on Indian restaurants in the US for almost three decades now. Here now is a report on one such meal of North Indian dishes. END_OF_DOCUMENT_TOKEN_TO_BE_REPLACED 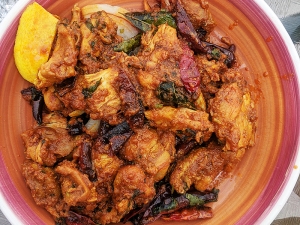 We were supposed to get food from Indian Masala in Maplewood two weekends ago but winter struck early and we ended up huddling indoors like weenies. This past weekend was quite a bit warmer though and so we revived our plan of walking the loop trail at the Battle Creek Park (the part that has the dog park in it) and then picking up food to bring back to our deck to eat with our usual crew of excessive eaters. I am very happy to report that not only was this meal very good, it was one of the best Indian meals we’ve had so far in Minnesota. That may seem like damning with faint praise but these days it’s really not. As I’ve reported before, the Indian food scene in the Twin Cities metro has improved radically in recent years, keeping pace with the growing Indian population in the area. And as this growing population is both mostly South Indian and mostly in the suburbs, it’s to the suburbs you have to go and the South Indian dishes that you have to order to experience this shift in quality. The mainstream food media in the area remains focused on the North Indian standbys in the Cities proper—this is a shame as both the new(er) restaurants and local diners interested in Indian food need a brighter light shone on these developments than a minor blog like mine can manage. END_OF_DOCUMENT_TOKEN_TO_BE_REPLACED