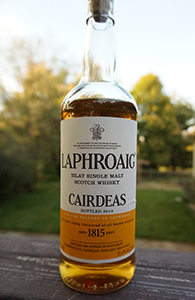 Here is Laphroaig’s Cairdeas release for 2014. Last year’s release was double matured in bourbon and port casks, and this year’s release is double matured in bourbon and amontillado sherry casks. Laphroaig did not send this whisky to space, and nor is it being sold for $150 or more in most American markets. As a result, perhaps, there’s no disproportionate fuss being made about it. I’m not sure how old this is or what relationship it has to their Quarter Cask or regular 10 yo releases but given the rarity of official sherry matured Laphroaig and the high premiums the independents have begun to charge for their releases of sherried Laphroaig, there was no way in hell I was going to think twice about paying just about $60 for this bottle. Now, let’s see what it’s like.z

Nose: This is no outsize sherry bomb. The familiar Laphroaig iodine and cereals up top with orange peel and raisins below. Gets more savoury (ham) and briny as it sits and there’s a bit of graphite (pencil lead) too. The sweeter notes expand with time, with some toffee and vanilla showing up, and there’s a bit of pipe tobacco as well. With a lot more time the sherry notes (the orange peel and raisins) intensify but the whole stays wonderfully balanced. Water seems to pull out the vanilla, and some cream with it while muting most of the rest.

Palate: Very salty entrance with inky, slightly vegetal (bell peppery) smoke behind, turning ashy as I swallow. None of the sweeter notes on the first sip and none of the citrus. On the second sip there’s the pencil lead and a bit of a hint of the citrus. On the third sip the citrus is no longer being bashful and now it’s somewhere between orange peel and preserved Meyer lemon. Highly drinkable at full strength but can still hurt you, say, in the completely hypothetical scenario (of course) in which you were to slide so low in your chair while reading as to be almost horizontal while taking a large sip. Sweeter with water and more vanilla on the palate now too, along with a little more lemon.

Finish: Medium-long. The ashy smoke picks up some charred meat as it goes. The salt lingers too and with more time the citrus shows up too. Water pushes the salt back and makes the smoke more phenolic.

Comments: This is good, honest Laphroaig, chock full of the distillery character, and it is so good to see it being sold for a good, honest price. The nose is the best part but the palate is no letdown either. The finish is the one place where the likely youth reveals itself as it can’t quite keep the party going. And, in general, while it’s pleasurable it’s not particularly complex. I preferred the nose without water and the palate and finish with. By the way, water brings it closer to the Quarter Cask than to the 10 which it seemed an obvious sibling of in the early going. I’ll be very interested to see how this bottle changes with time.