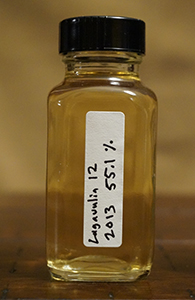 Let’s stick with Lagavulin but let’s take the exclusivity factor down a notch or two. Unlike the Feis Ile bottles, the Lagavulin 12 CS is not exactly hard to find—there are more than 31,000 bottles of the 2014 release.

I’ve previously reviewed the 2009, 2010, 2011 and 2012 editions of the Lagavulin 12. As I’ve noted before, along with the Caol Ila Unpeated, the Lagavulin 12 is one of the few value propositions in Diageo’s annual slate of special releases. For some reason it’s not an universally loved expression but I’m yet to taste one that I did not like a lot. I’ve managed to get a bottle every year since I came to know of it (2009) and hope to get my hands on the 2014 release as well (I’m not sure if it’s in the US yet). I do have a bottle of this one too but as I’m trying to keep my number of open bottles under control I asked my friend Patrick for some from his recently opened bottle when we last exchanged samples.

Nose: A little reserved at first. Mild, farmy peat and some vanilla and a touch of lemon. Then it all begins to expand, moving in a more coastal direction with kelp and brine. The peat begins to turn more medicinal as it sits and the lemon expands as well, getting a little waxy. Sweeter too now and the vanilla is joined by some cream. With water the smoke is to the fore and now it’s cleaner, sharper.

Palate: Nothing reserved about the palate—ashy smoke hits front and center and it’s got a peppery edge. But the sweetness is lurking right below it. On the second sip the smoke is all about the iodine and gauze bandages. On the third sip the citrus emerges—somewhere between lemon and lime—and it brings a lot of salt with it. With more time the sweetness comes to the front. The smoke starts going from ashy to tarry. Okay, let’s add water.The salt recedes and it’s sweet again at first but then the smoke takes over and as on the nose it’s sharper and cleaner now—with a little more time the smoke gets quite dense and while the sweetness comes back it’s held in check.

Finish: Long. The smoke and the salt keep at it for a while, with the farmy notes returning late. As on the palate with water at first but the finish gets even longer and ends with a big burst of pepper (black pepper).

Comments: Not very complex but simply very good. My one reservation is that the sweet notes threaten to get out of balance on the palate, but in the end they do get reined back in by the smoke and citrus. There’s not much else to say—if you like this profile, as I do, you will like this a lot.