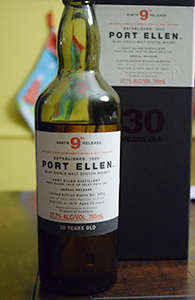 Let us continue with the Port Ellen annual releases. Yes, I know I said a long time ago that no one really needs more Port Ellen reviews—everything has already been said about the distillery and no one other than the very wealthy can afford any Port Ellens released since 2012 anyway. Do I have anything to add to the noisy chorus? Probably not but I’ve never let the fear of redundancy stop me from enjoying the sound of my own voice.

Both of these (the 9th and 12th annual releases) are from the 1979 vintage. The first is a 30 yo bottled in 2009 and the other a 32 yo bottled in 2012. I am only scoring the first as I have only a 20 ml sample of the other—purchased from Whiskybase, who were kind enough to divide the bottle they got into 20 ml samples without too much of a markup; this was after I purchased a full bottle of the 9th release a year or so after it was released. Little did I know then that the price I had to talk myself into (the most I’d paid for a bottle of whisky at that point) would seem almost quaint a few years later (the multiplier for this year’s Port Ellen, 15th release is almost 10x).

I opened it right away—it was purchased for a special occasion—and I loved it. I’ve dipped into it just a few more times over the years since (as you can see from the fill level) but by the third time I’d had far more big reputation whiskies than I’d had previously, and I began to wonder if, as good as I continued to find it to be, my previous rhapsodies about it had not stemmed at least a little from the expectation that it had to be one of the most special whiskies I’d ever taste. Now I’m more confident in my judgments which is a good thing as I am finally going to review it.

Nose: Gasoline and paraffin and a well-greased engine. Some lime, some olive brine and also something grassier/chalkier. The salt expands as it sits as does the general maritime character (seashells, a bit of kelp). Lots of dry smoke. Gets sweeter as it sits (mineral oil, almonds, cereals, some vanilla); much more phenolic now too. The smoke gets ashier with a few drops of water and the citrus turns to citronella; some well-aged ham too now (sweet with a little bite from the cure)

Palate: Much peatier and smokier arrival. The mineral oil sweetness is here as is the lime (zest) and some pepper but this hits with a big phenolic bat (“What?!” Ed.). Wonderfully drinkable at full strength despite all of that. The lime turns to more expressive lemon but, on the whole, it remains what it is as it sits but almost more so: a big, austere, minerally, phenolic Islay whisky. What will water do? It amps up the citrus and brings out the green olives from the nose but it also ups the tar.

Finish: Long. The smoke keeps on keeping on, getting tarrier as it goes and trailing coarsely ground black peppercorns and salt crystals and lemon peel in its wake. As on the palate with water and even bigger now. My mouth stays ashy forever after I swallow.

Comments: More elegant on the nose, more of a peaty bruiser on the palate—belying the general truth that peated malts get mellower as they hit their 30s. This is almost as good as Islay whisky of this profile gets (I’ll be reviewing one next month that trumps this with ease). Quintessential, you might say. Again, call me uneducated or inexperienced but, as good as this is, I don’t find it to be so very different from not only Caol Ila (especially with water) but also bourbon cask Lagavulin and Ardbeg in terms of general profile (of course, I’ve not had any bourbon cask Lagavulins of this age—I’m extrapolating from the younger ones I’ve had). Or it may be the case that my palate has turned to a preference for malts that exhibit at least a bit more fruit than this one does. But please don’t think I’m complaining; look at the score. 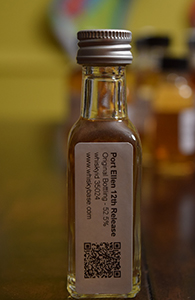 Nose: Somewhat closed to start but with a bit of air begins to open up: lemon, that same minerally peat, wet stones, almonds—but all far more restrained and delicate than in the 9th release. The citrus shows up after a minute but it’s more rounded and sweet. With more time there’s preserved lime (like this before the spices and sugar are added) and a hint of lemongrass. With a few drops of water there’s a nuttier/creamier note to start and then lemon curd in a tart and then some sweeter, muskier fruit.

Palate: Pretty much as promised by the nose but it’s more direct, more assertive to start, more acidic and more peppery (white pepper); but it’s certainly not as smoky or phenolic as the 9th. Not on the first sip at least; well, it’s not on the second or third sip either but there’s more smoke now. Gets spicier as it sits (with hints of crushed cumin along with the pepper which is coarser now). Okay, time to add a bit of water: as on the nose it’s the softer citrus that comes to the fore.

Finish: Long. Acidic smoke and lemon and salt. Not much change here with water.

Comments: Much more refined than the 9th release—and this is a good example of an older peated malt getting less assertive with the peat. Is it better though? It certainly didn’t do as much for me as it did for some of my betters. While I think I liked it a bit more tonight I certainly couldn’t confidently say I’d pick this over the 9th every time if they were both the same price (and both a fair bit cheaper).