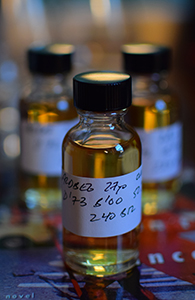 This is the first of three reviews of Ardbegs from the early 1970s that will be showing up on the blog in the next few weeks. Very few things in whisky geekdom are fetishized more than 1970s Ardbeg and, in particular, early 1970s Ardbeg. I’ve not had very many of these but I’m sorry to say that the few I have tried have all mostly lived up to the general hype (sorry because I’m temperamentally drawn to being contrary). Those, however, have all been official releases—see, for example, my reviews of the two US releases of the legendary Provenance series (here and here). These three, however, are independent releases. They were all bottled by Douglas Laing for their Old Malt Cask series—they were bottled in the early 2000s well before the split in the company. Two were distilled in 1972 and one in 1973; all were bourbon casks. Cask numbers were not listed and so these are identified by the number of bottles in the outturn. I got one ounce of each in a bottle split and on a per ounce basis these might add up to the most expensive whisky I’ve purchased. As such I’m really hoping not to be disappointed by them! Let’s see. First up, a 27 yo distilled in 1973.

Nose: Phenolic smoke right off the bat with bandaids and disinfectant, but there’s a lovely meaty quality to it too (ham) along with salt crystals, oyster liquor, kelp and preserved lime peel. Gets more and more intense as it sits with the smoke getting tarrier but always in perfect balance with the citrus and the coastal notes; cracked black pepper too now. With a lot of time (more than an hour) the smoke and tar recede and let the citrus (lemon now) and sweeter, more mineral notes come to the fore. That progression continues with a couple of drops of water, with more of the ham too now.

Palate: Everything from the nose but smokier here and the smoke’s ashier. A little sweeter too. On the second sip there’s almond peel and a slight waxiness. Rich mouthfeel. As on the nose it gets more and more pungent as it sits with a bit of burnt rope and the phenols almost ending up in rubber tyre territory. Gets sharper (acidic) as it sits and there’s a bit of pickled mustard seed too now. Mellower here too with time and water and the citrus is emphasized.

Comments: You know, this isn’t some entirely different beast from contemporary Ardbeg, it’s just that it has a depth and intensity and a balance that the younger, contemporary Ardbegs don’t have. There’s no fruity surprises to be found here but it’s almost as good as bourbon cask, peated whisky of this kind gets. The nose is excellent and the palate is not far behind. The 1974-98 Provenance is well clear of this but it’s pretty close to the 1974-2000 in my book.