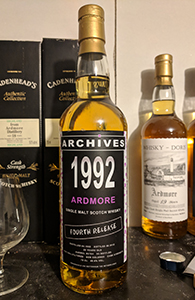 My whisky reviews have been flirting with relevance this month. I’ve reviewed widely available official releases (Cragganmore 12, Wild Turkey 101 Rye), independent releases that are still available (the Archives Aberlour and Orkney releases), and an official release that can still be found in some places in the US (the Springbank 13 Green). Lest my reputation be ruined I am going to slide in the other direction for the next few reviews.

First up, an independent Ardmore released in 2012. This too was bottled by the Whiskybase shop under their Archives label. It was released at a time when there were a number of indie 1992 Ardmores on the market. I think this has led to 1992 being proclaimed a special year for the distillery—though again it would appear that it is merely a year from which a lot of whisky is available for people to generalize about: Whiskybase lists 11 Ardmores from 1991, 7 from 1993 and 10 from 1994. Meanwhile, there are 73 listings from 1992. It would appear that a major parcel of casks from that year survived in a warehouse somewhere (most of Ardmore goes into the Teacher’s blend).

I opened this bottle last month for one of my local group’s tastings and drank it down thereafter at a very rapid rate. It was a very popular whisky at that tasting, by the way. Here now are my notes.

Nose: Mild peppery peat, lime, peach, apple, moth balls. As it sits the apple trumps the peach, and it’s more apple pie than apple per se. With a lot more time the citrus is more pronounced but it’s wonderfully balanced on the whole. Water emphasizes the pastry crust note.

Palate: All the stuff from the nose at first and then a big burst of fruit as I swallow, getting increasingly, though not intensely, tropical as it expands (passionfruit, guava, tart mango). On the second sip there’s some waxed lemon peel mixed in with the tropical notes. The fruit pops out earlier and intensifies the longer it sits. With a lot more time there are floral notes along with the fruit. Okay, let’s see what water does. Brighter and more acidic with water.

Finish: Long. The fruit keeps going here as a bracing bitterness develops as counterpoint—somewhere between peppery olive oil and hot tarmac. As on the palate with water.