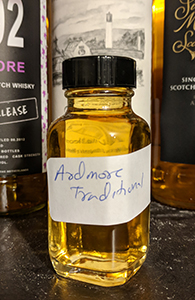 On Friday I had a review of an indie Ardmore 20 released some six years ago. Today I have a review of an official release. It’s not of much utility, however, as this Ardmore Traditional—the first official Ardmore to ever be widely released, about a decade ago—was discontinued some years ago (though stray bottles may still be hanging around in the US. It was replaced by another NAS malt at 40% abv by the name of Legacy. In the world of No Age Stated whisky, you see, the fancier the name gets, the crappier the whisky becomes. The Traditional, however, was not crappy despite being young and despite being made in a slightly complicated way with the whisky “finished” in quarter casks. As with all of Ardmore’s malt it is mildly peated. It used to be a very good deal in most American markets and I think I might have purchased my last bottle—from which this sample was saved—for less than $30 in the Twin Cities. The Legacy runs about $40, which is not terribly high in this market but I’ve also not read any reviews of it that have made me want to try it. The Traditional, by the way, was brought back by the owners a few years ago as just Tradition, but for the travel retail market—though it appears to be available more widely in the UK. I’m not sure how much it goes for; maybe I’ll keep an eye out for it while traveling to Hong Kong and India this winter. Anyway, here are my notes on the Traditional as it once was—this bottle is probably from the 2012 release or so.

Ardmore Traditional (46%; from a sample saved from my own bottle)

Nose: Cream and mild, peppery peat; a hint of lemon. Gets ashier as it sits—though the smoke is still mild—and also gets sweeter. With a drop of water there’s a bit of ham and some menthol.

Palate: Smokier on the palate but not phenolic. The sweeter notes are here too: milk with malt and a bit of cocoa powder. The texture is a bit thin. More acidic bite with a bit of time and the smoke is more pronounced. With more time there’s more pepper, more lemon and a bit of wet concrete. Smokier still with water and sweeter; the lemon gets pushed back

Finish: Medium. Sweet, ashy peat here too. No real development. As on the palate with water and the finish is a little longer now.

Comments: Ah, this is even nicer than I remember. It is a bit simple but by the same token it doesn’t really have any flaws. This would be a very good “everyday” peated whisky. I liked the nose better with water and the palate better neat. Is the Legacy as good? Is the new Tradition similar?