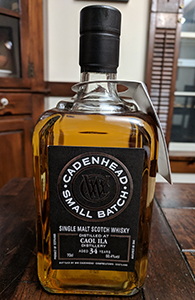 After last Friday’s Longmorn, here’s another 34 yo whisky. We go from the Speyside to Islay, to Caol Ila. There have been a number of older Caol Ilas from 1982 bottled in the last 5-7 years. And as per Whiskybase, in 2016 and 2017 Cadenhead put out nine 34 and 35 yo releases. This 34 yo is one of them and while the label describes it as a “small batch” release it’s in fact a single cask, a single hogshead. I guess whoever was printing the labels at Cadenhead that day wasn’t paying attention. It was bottled for the Dutch importer Bresser & Timmer in 2016. Old Caol Ila from the 1980s can be a wondrous thing; and while I haven’t reviewed very many of them, they’ve all been excellent (the one exception being an overpriced Samaroli that was just quite good).

This one, I can tell you, is indeed excellent. I took it to one of my friend Rich’s tastings earlier this month and it held its own against some very high-powered whiskies—well, at least until the early 70s Ardbeg came out. (I’ll have reviews of a few of those high-powered whiskies in the next month or two; though alas not the early 70s Ardbeg.) While not cheap, a Caol Ila like this is about as close as those of us who are not independently wealthy can get to good value for a >30 yo peated whisky from Islay—and, frankly, it stands shoulder to shoulder with Port Ellens of similar age that go for far, far more money. Here now are my notes.

Nose: Lemon, mild peat, sackcloth, brine, mineral oil, cracked coriander seed. Just glorious. With time there’s some sweeter fruit in there as well (orange?) and a big waxiness along with some mothballs. The smoke expands with time but it’s not particularly phenolic. Water brings out more of the wax and mothballs.

Palate: Everything from the nose but earthier with an earthy sweetness (wet stones) and some coal smoke rising as I swallow. Perfect texture. Not much change as it sits but why would I want it to? Water makes it brighter at first and pulls out some salt crystals and green olives. More coastal now. As it sits, however, the earthy notes emerge again with some pepper in tow.

Finish: Long. The smoke keeps going and picks up some bitter edges (peppery olive oil) as it goes. The lemon pops out again at the end. As on the palate with water.

Comments: This is earthy, austere, perfectly balanced. One of the best old Caol Ilas I’ve had and I’m very glad I have half a bottle left.