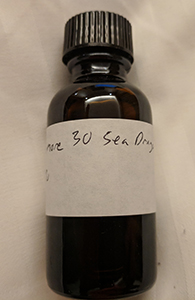 The blog turns six today and so here is the customary Bowmore review. My first ever review was of the lowly Bowmore Legend and since then I’ve posted a Bowmore review on every anniversary. In 2014 I reviewed the Bowmore 12 and in 2015 the Bowmore 18—but that’s as high as the age statements have gone on these anniversary reviews. Well, this year’s review is of a much older Bowmore—indeed, the oldest I’ve ever tasted—and it’s from a series with a very strong reputation: the Sea Dragon. A number of batches of these were released from the late 1990s through the early 2000s, all in ceramic bottles with striking art on them and it’s not always easy to know which release a given bottle is from. I got this sample from Matt G. and he couldn’t find a bottle code anywhere on his black ceramic bottle. Assuming this was not actually from a 2000s release, this will be both my first-ever 30 yo Bowmore and my first-ever 60s Bowmore.

Nose: Mild mentholated smoke, lemon peel, passionfruit. The fruit gets sweeter as it sits (peach, berries) and a little custardy. A small drop of water pulls out more of the custard.

Palate: Starts out a little blank but then it begins to expand as I swallow. Smokier and oakier here and the fruit follows behind. The texture is a little too thin. Fruitier with each sip but not quite a 60s/70s Longmorn/Caperdonich/Tomatin-style fruit-bomb. Water pulls out some ashier smoke and more of the passionfruit.

Finish: Long. The oak gets a bit drying at first but then the fruit pops out again. A little ashy as it goes.

Comments: I think the bottle this sample came from may have lost some oomph. I was expecting a greater intensity of fruit on the palate than was there. Still excellent whisky, of course. Too bad it wasn’t released at 46% or higher.