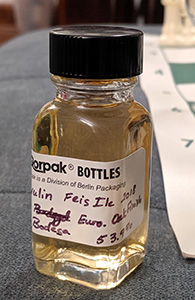 The last time I reviewed one of Lagavulin’s special releases for Feis Ile was in 2014. I have a few of the subsequent releases on my shelves but haven’t opened any of them yet—hmmm I should do something about that. Anyway, that one was a 17 yo from a vatting of European oak sherry butts. This one is a year older and is put together far more complicatedly. It was a release of 6000 bottles from a vatting of refill American hogsheads, rejuvenated (presumably this means re-charred) hogheads and “bodega” sherry butts. Whether “bodega” here means American or European oak is anyone’s guess, as is whether that means these butts were actually used to mature or transport sherry or whether they were sourced from some bodega and filled with disposable sherry for a short period of time. Anyway, that 17 yo, bottled for Feis Ile in 2013 was very sherry forward in all the best ways. Let’s see what this one is like.

Nose: Dettol, putty, peppery olive oil, organic peat notes (rotting leaves) and then expanding salt and lemon. On the second sniff there’s some sweetness emerging under it all (vanilla?). As it sits it gets a bit leafier and ashier. With more time it begins to soften a little; the sweeter notes come to the fore along with the lemon. Water brings out more of the fruit and makes it muskier.

Palate: Smokier here to start and the smoke keeps building—ashy at first, then picking up a lot of char and heading towards an ashtray full of stale cigarette butts as I swallow. Feels stronger than 53.9%. Quite tarry on the second sip and the rotting leaves begin to smoulder. With time the lemon expands here as well but the smoke is still front and center. Okay, let’s see what water does. It knocks back the tar and brings out more of the ash and char. As it sits now it gets somewhat vegetal.

Finish: Long. Smoke, smoke, smoke: tarrier here. The salt returns at the end. A little sweeter here too with time. As on the palate with water.

Comments: I have a feeling you could arrive at something pretty close to this by vatting the 16 yo and a 12 CS. The sherry casks—if indeed they were very active—are not very talkative here (no one is going to mistake this for a sherry monster), mostly imparting leafy, slightly vegetal notes. Despite the age there’s a rawness here (from the rejuvenated American oak component?) and it’s more powerful than refined. That’s not a bad thing necessarily but I have to admit I prefer some/most of the CS 12s I’ve had.

Thanks to Kevin for the sample!