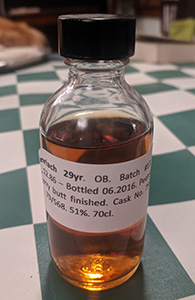 One more peated whisky to round out the week and it’s the oldest of the three. It was distilled in 1986 and released in 2016, as part of Batch 13 of Benriach’s “single cask” releases. Like Monday’s Lagavulin, this was made complicatedly: distilled from peated barley, (presumably) matured in ex-bourbon barrels for a good while and then finished in an oloroso sherry cask. Interestingly, Billy Walker and co.—then owners of both Glendronach and Benriach—were more forthcoming on labels of Benriach than they were about the so-called single casks of Glendronach (none of which, as far as I know, had or have the word “finished” anywhere on their labels). How long this finish was is, nonetheless, not specified. And nor is there any reason to believe that this is a true “single cask” as most people would understand the term and not another case of multiple casks being re-racked together into a sherry cask for the final bit of maturation/finishing. Anyway, let’s see what it’s like.

Nose: Nice rich notes of orange peel, honey, fig and a bit of tobacco. The smoke takes a bit to weave its way through—it’s a dry, woodsmoke. All very well integrated. Gets a bit brighter as it sits. With a couple of drops of water there’s some more fruit (apricot) and the smoke gets leafier.

Palate: More oak here and less of the orange peel; some pencil lead as well. Decent texture and not too much of an alcohol bite. Spicier on the second sip, with just a hint of savoury gunpowder. The smoke expands and turns a little bitter. I keep waiting for the sweeter fruit from the nose to turn up but all I get is a few hints of plum. Okay, let’s see what water does. It pushes the oak and bitter smoke back and pulls out some more of the brighter fruit here too.

Finish: Medium. Nothing terribly interesting at first. The smoke curls its way up again at the end, mixed with cracked black pepper. That leafy, slightly herbal note pops up here too with water.

Comments: This is a nice enough mix of peat and sherry but what’s missing is any complexity from the age. The oloroso finish is integrated fine but I suspect it was a way of putting a bit of a shine on a tired cask (or two or three). Water improves it but there’s no real character here, especially on the palate—the nose was the best part, I thought.