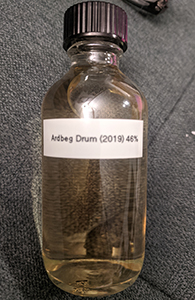 This was Ardbeg’s 2019 Feis Ile release. I have to admit I stopped paying attention to Ardbeg some years ago. The 10 year old is still an Islay classic and my last bottles of the Uigeadail and Corryvreckan were very good too (albeit neither were anywhere close to being recent releases), but most of the noise emanating from the distillery—or rather from its owners—has seemed for a while to be in the service of high-concept silliness. I thought 2018’s Feis Ile release, the Grooves, was fairly ordinary. Why then am I reviewing the 2019 release? Well, largely because in theory at least bourbon cask Ardbeg finished in rum casks does not seem like a bad idea. (Of course, they say they’ve “rested” their spirit in rum casks; unlike all those other distilleries who make their spirit ride treadmills and run marathons in finishing casks.) Will the reality of this whisky in fact match up with that theoretical promise? Only one way to find out.

Ardbeg Drum (46%; finished in rum casks; from a bottle split)

Nose: A big medicinal wave (Dettol) mixed with coastal notes (salt, kelp) and lemon. On the second sniff there’s youth: hints of gasoline and mezcal. As it sits there’s quite a bit of vanilla. The youthful notes get more pronounced as it sits. Water pushes the youth back but doesn’t make it any more interesting.

Palate: Comes in thin, in terms of both texture and flavour. Those youthful notes are even more pronounced here and the smoke is more like wet ash. After a while there’s finally some evidence of the rum—that hint of gasoline from the nose exapnds a bit—but there’s even more evidence of the oak, with a growing, uninteresting bitterness. Thinner and even less interesting as it goes on. Okay, let’s see if water saves this. No, it doesn’t: just makes it thinner still.

Finish: Long. The weak, watered-down notes from the palate peter out with first the vanilla and then the oaky bitterness coming on strong. As on the palate with water.

Comments: Pleasant on the nose to start but downhill from there. Does not make me regret getting off the Ardbeg Day hype train. Your mileage may vary. Was the higher-strength Committee version better?

One thought on “Ardbeg Drum”