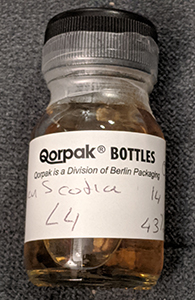 Here is the Glen Scotia 14 that I mentioned when I reviewed the Glen Scotia 12 last October. I’m finally drinking my sample hoard down and have begun to make deep inroads into the back catalog. And I mean “back catalog” quite literally: many of the samples I’ve been reviewing of late are from sample swaps from a long time ago: I placed them on my sample shelves and they got obscured by others that came in after them. This one, in fact, might be from a swap from 2011 or so. I received two 1 oz samples of this. My spreadsheet tells me I drank one in 2012 and gave it 85 points. And then I forgot about the other ounce. Which is good since I get to formally review it now. Don’t worry, it’s been in a tightly-sealed, parafilm-wrapped bottle in a cold basement the whole time and the fill-level hasn’t dropped at all. The whisky inside is even older still. As the label notes, the bottling year was 2004. A long way away from the current official Glen Scotia releases—I’m not even sure what their range looks like now—and so unlikely to be any kind of guide. But it’s always fun to drink whiskies released at a time when distilleries were sitting on deep stocks. Let’s see what this one was like.

Nose: Quite honeyed at first with some prickly peat coming out from below. Leaves and other organic material on the second sniff along with some soot and a metallic note; the honey turns to orange peel. With time some cereals emerge as well. Maltier and fruitier with a few drops of water.

Palate: Sweeter here with the metallic note and the soot mixed in. The texture is a bit too thin. Saltier on the second sip. Not much change with time. Let’s see what water does. A bit more fruit here too with water but no major change.

Finish: Medium-long. Turns bitter here with a vegetal/oak extract quality. Some menthol coolness as well at the end. Less vegetal with water.

Comments: The nose was my favourite part and I found it interesting how different the palate was from the richer nose. Too bad about the abv. I think bottled at 46% it would have been significantly better—this sort of an austere palate is better served by a richer texture. As it is it tastes a bit like a good peat-forward blend. Which is not a bad thing at all. I see no reason to disagree with 2012 me on the score.

Thanks to bpbleus for the sample!