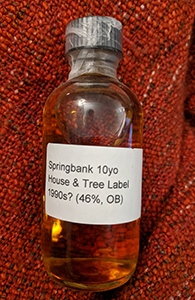 This Springbank was released for the German market in the early/mid 1990s. It is one of a few bottles released with the so-called “House & Tree” label. Whiskybase has records of a NAS House & Tree label for the French market that was a release of 251 bottles. Serge has a review of another NAS House & Tree label for the German market (which may or may not be this one, a release of 319 bottles). This made me think that the label on this sample was mistaken about the age statement, and so I checked with the source of the sample, the Notorious Pat T. He sent me pictures of the bottle this sample came from and I can confirm that the bottle has a smaller label around the neck with the age statement and that the back specifies that it was bottle 43 of a release of 294 bottles, possibly for Krüger’s Whiskygalerie. So much confusion and none of it, frankly, very interesting. I say this after having made you read a paragraph about it. You’re welcome.

Nose: Orange and honey off the top with a little damp earth mixed in along with some earthy peat (not phenolic). Saltier with every sniff with a touch of savoury gunpowder joining the party as well. Gets more austere as it goes with salt and cracked pepper topping the citrus. A few drops of water and the fruit expands: some sweeter notes now (berries) to go with the citrus. With more time the citrus moves towards apricot and there’s some toffee as well.

Palate: All of the above with more peat (again earthy, not phenolic) and more pepper. Very good texture and power at 46%. On the second sip the salt expands a bit here as well and it becomes that typically Springbank mix of austere (earth, oil, pepper) and fruity (bitter oranges, dried orange peel). Let’s see what water does. Ah yes, it pulls out sweeter fruit here too. And then it gets leafier and the salt returns.

Finish: Long. The austere notes are in the lead here but the dried orange peel is present as well. Longer still with water and the salt and orange are now in good balance, with the salt having the last word.

Comments: This is really rather good. Obviously sherried but without the sherry dominating the spirit. I know I’m on record as being skeptical about the notion of distillery character but this is very quintessentially Springbank. The current 10 yo, it must be said, is very good too—and is clearly in the same lineage as this one—but this leans on the austere notes rather than the fruit.