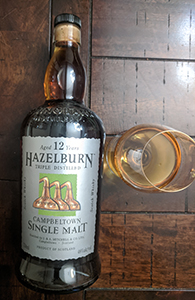 Springbank week began with the 2019 release in the Local Barley series. It continues with a Hazelburn 12 released a decade before that. This is one of many bottles that I purchased in the 2008-2012 timeframe—also known as The End of the Golden Age of Single Malt Whisky—and never got around to opening (on account of having purchased too many bottles of whisky at the time). Well, I’m opening them up now one by one and the time of this Hazelburn has come.

As you doubtless know, Hazelburn is the triple-distilled, nominally unpeated whisky produced at Springbank. I say “nominally unpeated” because among the Hazelburns I’ve reviewed (not very many) is one that had fairly palpable peat. That was an 8 yo from a bourbon cask. I’ve also reviewed another 8 yo doubled matured in a Sauternes cask and more recently a 14 yo from an oloroso sherry cask. I liked them all fine but none got me very excited (I scored them all in the 84-86 point window). This one also clearly has a heavy sherry component—let’s see where it falls.

Nose: A nutty, raisiny start. Orange peel on the second sniff and it gets sweeter fast. Some brine too which picks up as it sits. With more time the familiar Springbank leather and earth complex shows up as well. A few drops of water brighten it up and push the leathery notes back a bit.

Palate: Comes in with a fair bit of savoury gunpowder accompanying the nuts and raisins and orange peel (dried) and earthy notes (dried mushrooms)—the sweetness is less in evidence. A good bite and rich texture at 46%. Not much change with time. Brighter here too with water but the savoury gunpowder is still here (which I like).

Finish: Medium. The dried orange peel and mushrooms hang out the longest picking up more salt as they go. Longer and as on the palate with water.

Comments: Well, I’ve noted before that there isn’t always an effective difference between Longrows and Springbanks and here now is a Hazelburn that might as well be a Springbank. That’s not a bad thing, of course. I’m guessing oloroso or cream sherry casks made up the bulk of this vatting as I didn’t get any yeasty notes worth noting. Anyway, a no-fireworks but very pleasurable sherried whisky—though the full-on sulphur-phobe will likely disagree.