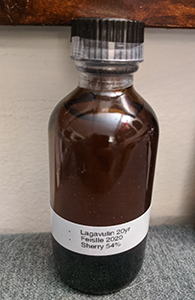 And I close out what turned out to be a week of sherry cask whiskies with the Feis Ile 2020 release from Lagavulin. (See here for Monday’s Springbank and here for Wednesday’s Kilkerran.) Feis Ile 2021 is currently in progress—it is being held online again this year on account of the pandemic. I can only hope for all our sakes, whether we are whisky drinkers or fans of whisky festivals or not, that it can go back to being in-person next year.

I’ve reviewed a few of Lagavulin’s Feis Ile releases over the last few years. I was a huge fan of the 24 yo released in 2015 and also of the 17 yo released in 2013; the 18 yo released in 2018 I thought was very good but not great. What all of them had in common was sherry involvement, though only the 2013 was straightforwardly from sherry casks. This 2020 release is a vatting of refill hogsheads (ex-bourbon presumably) with hogsheads “seasoned” with PX and oloroso sherry. As to what exactly the “seasoning” involves, I don’t know, and nor do I know how long the spirit that came out of those casks spent in them. Well, that 2015 release was also complicatedly made and I thought it was just excellent; let’s hope this one will prove to be so as well.

Nose: Mellow smoke at first, intermingled with citrus, but the phenols begin to roll up from below quickly enough. The smoke and phenols  meld nicely with the citrus (orange peel). Up next is graphite, ink and cured meat and then a growing coastal wave: kelp, brine, oysters. The smoke wafts gently through it all. This is really lovely. With water there’s an almost Springbank/Longrow thing happening with cracked coriander seed and burlap and brine.

Palate: Smokier here, dry at first but then a big charred note (burnt rope) and then a tarry wave as I swallow. The nose was restrained but it hits hard here. Nice texture and not too hot at full strength. More salt on the second sip. The phenols are even more pronounced after 15 minutes or so and then it gets a little sour (a slight malt vinegary note). A few drops of water soften and brighten it up a bit and now I like it a lot more as the citrus and spice notes from the nose show up here as well along with the lighter coastal complex.

Finish: Long. The tar and char take a while to fade, leaving the salt in their wake. No new development here. As on the palate with water.

Comments: The nose is elegant and just excellent. Neat, the palate is not quite up to that level and the lack of development is a little disappointing. The sherry doesn’t feel bolted on but it also doesn’t really bring very much on the palate. With water it becomes altogether more elegant and complex on the palate as well. If you have a sample I’d suggest not waiting too long to add water; and if you have a bottle I’d be interested to hear what your experiments with water have yielded—I obviously didn’t have enough of it to be able to tinker and find the optimal (to me) amount of water to add.