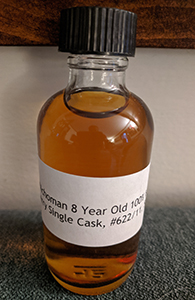 Kilchoman Week began with a review of a 3 yo distilled in 2007 and matured in a bourbon cask. Here now is a 7 yo distilled in 2011 and matured in a sherry cask (the label on the sample bottle says 8 years old but as per Whiskybase this is a 7 yo). And this was one of their 100% Islay releases, which I think means it was made from Islay barley, perhaps from one of the nearby farms. This was a US release, bottled for the importer ImpEx. Historically, I have preferred bourbon cask Kilchoman to the sherry cask versions. Let’s see if this one breaks that mold.

Nose: Ashy peat shot through with a mix of orange peel, brandied raisins and smouldering leaves. Some pencil lead/graphite in there too. A little saltier as it sits and then a sweeter mix of milky cocoa and vanilla emerges and expands along with the citrus. A few drops of water pull out some apricot to go with the citrus and push the ash back a bit.

Palate: Comes in pretty much as predicted by the palate. Pretty hot at full strength though. Mellows as it sits and the smoke gets sweeter (pipe tobacco); quite a bit of pencil lead/graphite here too. Really no youthful notes at all, which is quite remarkable. Less smoke here too with water but otherwise quire consistent.

Finish: Long. The ashy, sweet notes continue for a long while, getting richer as they go; some oak begins to pop out at the end. As on the

Comments: This is a very good marriage of peat and sherry; they don’t fight each other and the ashy smoke and the rich sherry are perfectly integrated. Another example of a Kilchoman that comes off much older than it actually is.