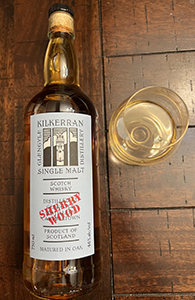 Closing out Campbeltown Week is the sherry cask counterpart to Wednesday’s excellent bourbon cask iteration of Kilkerran’s Work in Progress 5 release. This was, if I remember correctly, the first sherry cask release in the series—a feature repeated in the following Work in Progress releases. The Bourbon Wood was one of the best young whiskies I’ve had (and Monday’s 8 yo Glen Scotia was very good too). How will the Sherry Wood compare? Only one way to find out.

Kilkerran Work in Progress 5, Sherry Wood (46%; from my own bottle)

Nose: Though they’re exactly the same age and distillate this noses quite a bit younger than the Bourbon Wood with a mezcal-like note coming off the top. Below it is slightly rubbery peat, some lemon, some chalk and a lot of salt. Not much change with time. With a few drops of water it actually gets a little closer to the Bourbon as it becomes more austere and both the rubbery peat and the mezcal recede; more sweetness now: a bit of vanilla and some wet stones.

Palate: Comes in pretty much as indicated by the nose; maybe a little sweeter. The texture is thinner than the bourbon wood’s as well. More peat with each sip, peppery and ashy; that mezcal note mixes with the peat. Better here too with water. There’s more pepper and the ash turns to char. The sweeter notes from the nose are here as well along with a touch of lemon.

Finish: Medium-long. It’s the peat that makes the last impression along with the salt. Water emphasizes the char and pushes back the salt.

Comments: This is a nice, young peated whisky with a mild sherry influence. There’s nothing wrong with that. But coming on the heels of the Bourbon Wood release it somehow disappoints at first. That one is mature above its years; this one noses and tastes younger. Not sure how it happened but the sherry seems to have blocked much of the complexity and emphasized the more youthful notes. That’s when taken neat. Water fixes almost all of that even if it doesn’t quite lift it up to the level of the Bourbon Wood. I know how I’m drinking the rest of my bottle.