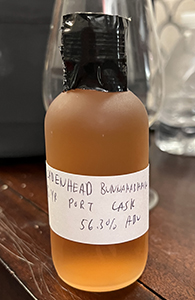 After a week of wacky mezcals—which began with one distilled with Iberico ham and ended with one distilled with mole poblano—let’s do a week of wacky single malts. Well, not really that wacky. These are all whiskies that involved port cask maturation or finishes. They’re also, as it happens, all peated whiskies. I’m not generally a fan of port cask maturation but—as I believe I’ve noted before—I think it’s in a marriage with heavy peat that it shows to its best advantage. Bunnahabhain may not be what you think of when you read the words “heavy peat”…or maybe that isn’t true anymore given how much peated Bunnahabhain, indie and official, has hit the market in the last decade. At any rate this is peated Bunnahabhain. It is eight years old. It was distilled in 2013 and spent five years or so in a bourbon cask and then three years or so in a tawny port cask. That pretty much counts as double maturation in my book. And hopefully that means the usual problems of wine finishes will be held at bay. Let’s see.

Bunnahabhain 8, 2013 (56.3%; Cadenhead; secondary maturation in a tawny port barrel; from a bottle split)

Nose: Comes out baconny and jammy all together off the top; a big hit of salt too. On the second sniff it gets quite inky and earthy; some pencil lead too. Gets meatier as it sits and there’s no sign of wine separation, thankfully. With more time and air there’s some salted pistachios. With a few drops of water the smoke gets pushed back a bit and a beany note develops.

Palate: Comes in as on the palate except with more dry smoke which begins to turn phenolic as I swallow. Very approachable at full strength with rich texture. More smoke and more of the earthy notes with each sip and the salt begins to pop out earlier. The savoury and sweet notes merge nicely with the dry smoke as it gets some air in the glass. Okay, let’s add water. Water pushes the smoke back here as well but not as much—the sweeter notes are emphasized.

Finish: Long. Yes, the smoke expands and gets more phenolic as it goes, picking up a fair bit of salt at the end. With time the smoke gets ashier at the end. Less salty and generally as on the palate with water.

Comments: Well, this was very nice and hopefully a good portent for my week of port and peat. I don’t know how much this went for but if reasonably priced I would be very pleased if I had a bottle on the shelf. Lucky you, if you do. The smoke and the port are melded very well and the combination covers up the youth.