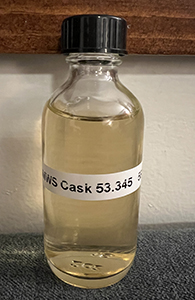 I was supposed to review this Caol Ila bottled by the Scotch Malt Whisky Society last month but accidentally reviewed this 13 yo instead. That was not a grave mistake as I liked it a lot. But then I almost always like Caol Ila from refill bourbon hogsheads. This one is 2 years younger but is also from a refill bourbon hogshead. Let’s hope it doesn’t prove my preferences wrong.

Nose: Bright carbolic peat with lemon and lightly ashy smoke. On the second sniff there’s a coastal array: kelp, oysters, brine. Some agave aromas lurk beneath. Gets quite salty as it sits. A few drops of water and this gets turned up to 11 on all counts. Sweeter now with malt and ham brine joining the party.

Palate: Comes in pretty much as advertised by the nose. Approachable at full strength—and a nice texture—but this should open up nicely with water. Yes, as on the nose, water really makes every facet of this uncoil and then melds it all together nicely. More pepper now, sweeter peat, and more lemon; the smoke picks up more ash

Finish: Long. The smoke expands as it goes, picking up some cereals and some inky sweetness; the phenols expand again at the end. As on the palate with water.

Comments: This is just lovely young bourbon cask Caol Ila. Might have turned into an all-timer with another 4-9 years of aging but hey, it’s pretty good as is. More direct neat, displays a complexity beyond its years with water.